By M.S. from Sydney, Australia – User of an Atlantis Ring in Palladium Silver

The first thing I noticed (and it dovetails in very well with your remarks below about “enhancing the power of silver significantly”) is that when I take the ring off, not only is there the previously mentioned tingling of circling energy and resonance of connection with the ring felt around my finger, this extends for a substantial period of time, some hours, perhaps maybe of four or five hours after wearing it and if for some reason I leave the house without wearing it, I re-experience the tingling and a feeling of nakedness in the area where the ring normally sits on my finger. It’s a little like the subtle pull of a magnet where you can feel the force field of each of the polarities actively attracting if you hold them close to one another. However, somewhat intriguing was that this tingling and attraction between ring and finger was also experienced over the distance of about five to seven kilometres, which was surprising the first time it happened, but then I became more mindful and aware of the sensation as it repeatedly occurred on subsequent occasions. If you are familiar with the energies of a pair of matched Boji Stones, that is probably also a helpful analogy to describe the pull of attraction and subtle interplay of energies.

Now where this fits in with your observation of “enhancing the power of the silver” is that when I have the ring off, I normally sit it on a little crystal base plate, a small slab of polished unakite, which in my experience tends to harmonise the energies of rings, introducing a clean softness and bringing the rings back to an almost neutral state. I have used this for many years and have also noticed that this cleanness or neutral energy dissipates quite quickly, easily within an hour or maybe even just 30 minutes after re-wearing other gold, gem or silver rings; however, I noticed that the palladium silver tends to hold and retain this cleaner, more neutral energetic sensation, even though on another level, the ring is also immediately harmonising with my individual energy field. That is, not only do I sense my energy melding quickly with the ring immediately after placing it on my finger, the ring also retains that neutral clean sensation of the unakite for up to, again, around four or five hours after wearing it.

This got me intrigued and so I researched more about silver and although it is known that silver and gold particularly are used in jewellery to ‘fix’ or hold the energy of particular gems, I had not experienced the longer lasting influence of palladium silver. So one night, rather than placing the ring on the unakite base plate, I perched it on top of a piece of Himalayan ice quartz which has a very different energy, to see what would happen when wearing it the following day. Well, I was delighted as yes, the palladium silver ring will also retain the quite different expansive energy of the Himalayan quartz and also for about four or five hours. This finding allows us to utilise the palladium silver Ring of Atlantis as a very flexible, temporary vehicle to bring the energies of other stones around with us for a very workable four or five hours. Let’s say that you were visiting an old cathedral or sacred space and you were looking for additional insight or expansion, you might place your ring on a piece of amethyst or phenacite overnight and then the energies would be with you during your visit the next morning. Or you had a job interview or other stressful situation, placing the ring on a piece of black tourmaline would give you added grounding and protection for the period of the interview. Although I tend to carry crystals around with me in my pocket, not all my pieces can be carried easily so just by placing the ring on a larger specimen allows you to make more direct use of the energies by having the ring absorb and harmonise with the particular energy of the stone. Of course a great deal of subjectivity enters in here and individual experimentation will need to be done to find out if the time that it takes for the ring to absorb the energies effectively can be shortened (the working hypothesis at the moment is placing the palladium silver ring overnight for around eight hours on a mineral gives approximately four or five hours worth of energetic use of that mineral energy via the ring after placing it on your finger) or even lengthened (would the ring absorb more energy if left for a few days on a mineral and would this increase the length of time the mineral ‘output’ was released by the ring?).

I recall reading on your website that some purchasers of the Ring of Atlantis notice the ring working very hard to dissipate negative energy in their environment and this manifesting as a quite quick dark tarnishing of the ring. I have not noticed this effect and indeed the ring has stayed far cleaner than I had anticipated and although I do rub it daily to try to keep the shine up, I notice that there are times when for almost no reason whatsoever, the ring seems to want to discharge energy, maybe to ground or remove negative energy, I cannot say but I noticed once that when i was reaching for a door handle which was made of aluminium, my hand somehow veered toward the aluminium handle and almost sparked on contact like a discharge of static electricity and in the process left a little scratch on one of the triangles of the ring. At the time I didn’t really notice it but I recall being a little annoyed by what I thought at the time was my carelessness. Anyway, I have noticed that the ring does like to do this, it seems to need to or want to earth itself. I found myself veering inexplicably into a stone wall a few days ago and the ring dragged itself against the sandstone, again on the same triangle, so I have now begun trying to pre-empt this, just by removing the ring for a few seconds or minutes, placing it on any surface seems to suffice and then I place it on my finger again and it does feel lighter somehow, so I imagine that speaks to the comments that other users of the ring have detailed that the ring works to attract and dissipate negative energies, so releasing them in the some manner seems sensible, especially if this helps to limit any tarnish, as it really is a stylistically beautiful ring and I am trying so hard not to scratch or damage it in any way and have recently ordered a specialist silver polishing cloth to hopefully smooth out out any little scratches or nicks that the ring acquires with use and to keep the almost ethereal high shine that just resonates that little bit higher than a pure silver ring. Obviously you can tell that I love your ring Marcia! And just to round out this train of thought, it is worth mentioning that the more I ground the ring (perhaps a couple of times a day) the less ‘accidental’ collisions between the ring and hard surfaces seems to be happening which I am very pleased to report!

With respect to the quickening of intuition, I have noticed the free and easy way in which thoughts seems into pop into my head in a timely fashion, sometimes providing quite esoteric information on areas that I am studying in that moment and other times for quite mundane yet helpful matters. I was heading to part of town here in Sydney that is a mess with construction as they are building a new tramway/subway on the main streets so you never know what roads are open or if there is any street parking, so I had intended on parking in a pay station and then walking to my destination. The traffic was of course gridlocked and re-routed another way from when I had last driven there so I got diverted on to some back streets and seemed to be unable to reach my intended destination, when out of the proverbial blue, the question, “Why don’t you just park on the street if you can find a space?” came quickly to mind and then, right there, the gridlock eased and nicely-sized space appeared, I reversed in and then discovered I was only around 100 metres from where I was going. Mundane yes, but very helpful indeed and it is probably worth noting that the quality of inspiration, or more accurately, how it is actually perceived, is somewhat different from ‘normal inspiration’ in that inspiration with the ring is enhanced, clearer, less open to interpretation and delivered much more in real time and relates to things you are dealing with in the now, not things that you thinking about that is either in the future or the past.

Anyway, I am sure that I am yet to only scratch the surface of the abilities of the palladium silver Ring of Atlantis and I haven’t yet even mentioned or begin to quantify or qualify the homeopathic influence of the indium content in the alloy but hopefully in time I will be able to learn more about its metaphysical influences. [..] I should also say that I completely concur that the ring benefits beautifully from having a few hours exposure to sunlight and I also had it out at the New Moon a short while ago which seemed to bring a very mystical energy to it although I could not really discern anything I am able to yet quantify, nor, as yet, have I had the ring exposed in any deliberate way to a Full Moon yet, but I can imagine that the ring will resonate wonderfully at that time.

Atlantis Rings in Palladium Silver are available through custom orders via email. 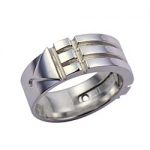 The Atlantis ring is composed of two isosceles triangles, 3 long lines and 6 short lines, 2 holes and a straight groove uniting these. The design follows a specific measurement based on Sacred Geometry proportions.

Made to the Highest Precision

Sculpted by the artist in 3D CAD for the highest precision and application of the Luxor symbol, cast in high quality materials such as solid gold and silver and finished by hand with love and positive intention.
Dowsing tests show high measurements in the range of Sacred Healing Sites around the world on the Bovis Scale of frequencies.

Insights on the Atlantis ring by an experienced Energy Healing Practitioner and Radiesthesia Researcher – Read here. 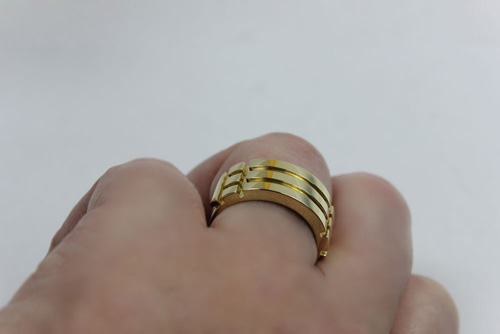 The Atlantis Ring is available in solid 18K Gold, 14K and 10K Gold as well as in Sterling Silver and 999 Fine Silver. Visit the Shop section to browse all options! 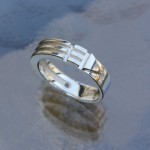 Atlantis Ring slim model for those who prefer it smaller. It is elegant and beautiful.

“Dear Marcia,
I received the ring this morning and God I'm blown away!!!
I've never seen one made with such an amazing precision! What a marvelous piece of craftsmanship! (May I say craftswomanship?)
And believe me I can make the difference and appreciate. I wear Atlantis rings for more than 35 years, and yours is by far the most beautiful I've ever own. ...[...]... Patrice Gaudey / France"
See more messages from clients HERE

Do NOT follow this link or you will be banned from the site!